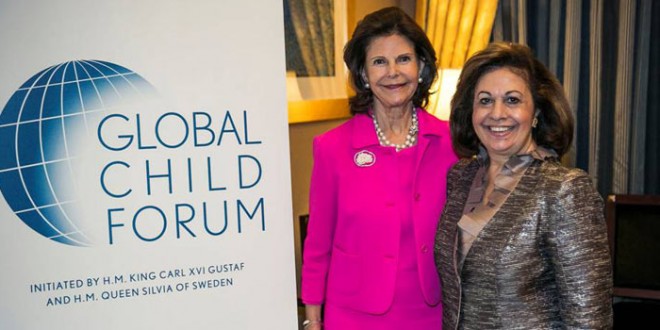 ON A RECENT TRIP TO DUBAI, WE TALKED TO THE INSPIRATIONAL ROYAL AND DISCOVERED WHY SHE DOESN’T WEAR A CROWN

As soon as Her Royal Highness the Crown Princess Katherine of Serbia steps into the room, she immediately puts us all at ease. The Serbian royal is quick to politely dismiss her two escorts, and walk towards us with a friendly smile, greeting the HELLO! Middle East team with a warm handshake.

The location was a presidential suite in the Shangri-La Hotel, one of Dubai’s longest standing hotels. “I love this hotel, it feels warm and cosy,” the royal said.

The Princess’ only request was that the tennis showing on the suite’s television be switched off, as she might get distracted if her favourite player is competing – which is of course, Novak Djokovic, the Serbian-born tennis ace who is currently ranked World No1.

It’s the eve of her 71st birthday, and The Princess will be spending it at the Global Child Forum, an initiative held under the patronage of Her Majesty Queen Silvia of Sweden and Princess Haya Bint Hussein, wife of His Highness Sheikh Mohammed Bin Rashid Al Maktoum, Vice-President and Prime Minister of the UAE and Ruler of Dubai.

The event was the first outside of Sweden and took place at Dubai’s Madinat Jumeirali, with experts in attendance to discuss children’s rights in the Middle East and North Africa.

It’s a cause close to the Serbian royal’s heart. “I’m a mother, not only to my children and grandchildren, but also to my nation. Children suffer when their parents suffer. You cannot separate the children from their parents,” she said. The Greek-born Princess has been recognised globally for her philanthropy. She tirelessly fights for the rights of her people and beyond, namely children and orphans in Serbia. “My dream and wish in this world is that we all unite,” she told hello! Middle East. “There is a strategy for war but no strategy for peace. We will not have peace until we invest in peace. This planet is a lot smaller than what we think, we need to become givers, not takers.”

What are the main issues affecting children in the Middle East and beyond?

I’m very sensitive about the Global Child Forum. I’m grateful to Her Majesty Queen Silvia, who started this programme, and also to Her Highness Princess Haya, whom I’ve known for many years. I knew Princess Haya when she was a young girl in Jordan. She was always so wonderful, caring and giving of herself. I really felt that there was always a purpose for this young lady. Sure enough she is now a patron with Queen Silvia for this important forum. I’m very honoured to be invited here to join them. It’s important to remind people about these causes. We must live in a world where the children are not victims.

If a father has no job and a mother is worried about having to leave their home due to conflicts, the child becomes a victim of a world where there is no harmony. The children are the first affected, as they’re too young to take care of themselves.

How can people at home raise awareness and support the cause?

Without love we have nothing. I want to encourage people to have more love and care for one another. People cannot be good to themselves if they are not good to others. We have a choice in life, to see things positively and to be grateful. If we choose to do the contrary, we will have a miserable life. The problem now is that children are not growing up in a positive atmosphere, they must be praised. I’m now making stickers which will be in all the cars in Serbia. They will say, “Have you praised your child today?” The biggest gift you can give a child is self-confidence. They can have all the diplomas in the world, but the titles don’t make the people. We have a lot of choices in life and our life is the choice we made.

You’ve done a lot to support the young in Serbia. What has been one of the most important ways in which you’ve helped?

After ten years of conflict in our country, I could see the ones who were affected the most were the children, so I started the first child-line in our country; it was the first ever 800 number. With the support I had from Brussels and the United Kingdom, who helped train the people answering the phones, we started to receive thousands of phone calls. Not because they had been abused, but because children could not believe they could call for help without it costing money. They told us they felt more secure and that they could trust us.

Every year you and your husband, His Highness Crown Prince Alexander II, host hundreds of orphan children at the Belgrade palace. Can you share a favourite memory from these special events?

My husband lived in exile for many years, but now we live in the palace. When I arrived there the first thing we did was to organise two annual events at Christmas and Easter. We invited over 1,200 children from all over the country. We have toys for them, we sing and we eat; it’s a really fun day.

I remember one occasion it was Easter and the children were out in the gardens on a chocolate egg hunt. When we came back inside we heard a scream in the middle of the room between two children. It was a little boy who was eight and a six-year-old girl. They were brother and sister who had been separated by mistake during the conflict. They had found each other in the middle of the room among hundreds and hundreds of children. Just to witness this in life, the joy, it was a miracle. The little girl had been told that all of her family has passed; she kept looking up to the ceiling asking if her mummy and daddy were coming too. She was hugging and kissing her brother. At the end of the day, when we tried to help them into the bus, we had to pick them up and carry them as a unit as they wouldn’t be separated. I was told they stayed like that for a very long time.

So you see it’s all about making a difference. When the children come to visit me, they always ask where is my crown, and I tell them my crown is in my heart.

You’ve visited the UAE on several occasions. How does it feel to be here?

I think the leaders in this world must always remember what they are there for. Look what His Highness Sheikh Mohammed has done here in Dubai. This must be the fastest growing city in the world. You can see the devotion and commitment that the royal family has done for this part of the world. They have made people here proud and when you are proud, a country can grow. The people help make it and preserve what it is – you make sure nobody spoils it.

Whenever I come to Dubai, I can see that the people are happy to be here and happy to show you around. When I went to a museum today, the people were thrilled; they are full of imagination and culture. It’s a beautiful country and it deserves to be the way it is. Even though the world has been through an economic crisis, when people do things right, it works well and I think Dubai could be a good example to other countries that are small.

It’s great to have the Global Child Forum here, especially when the country is thriving and the children are growing up in this environment. When they grow up, they will follow what they have learnt by living here.

The Greek government recognised your father for his philanthropy efforts. You in turn have done a great deal of work for countless causes. In what ways did your father influence you?

I was very lucky to have parents who taught me about the joy of giving. My mother was an amazing woman. We lived in Athens and when we would go out with her to see a movie, we would all walk out with big bags holding food and clothes. She knew every man and woman in the corner of the streets. She knew the people selling chestnuts in the winter and corn on the cob in the summer. She knew everybody’s stories. These were the people that made her happy. I was very lucky to be around this from an early age, it made me grateful.

I want to help, it’s non-stop, but we’re really trying our best. I’m also building kindergartens as the further you go out of the main city, the more the wives and mothers can’t work because kindergartens don’t exist. This means they cannot then bring in a second income. So we’re building more schools to help.

You were educated in Athens, Switzerland, America and the United Kingdom. How did you find expat life in these different parts of the world?

I was brought up in Greece, but my mother always told me a girl never has a country. So I grew up knowing that I would have to follow my husband and not the other way around. I was always ready to do what I had to do. So I felt very blessed to meet my husband. He is an amazing man with such a big heart. He has had a very difficult life; both his grandfathers died at a young age, as did his own father, when he was just 47 years old.

What is the most important to you in your role as the Crown Princess of Serbia?

I think the most important thing is to support my husband. I want to also help the children grow up to have the same sense of responsibility to our country as we do. Even my five grandchildren are growing up understanding that.

There is something very special about having a royal family in a country – they become the unifying factor. There is a role out there that cannot be done by a prime minister or president.

We often get together and visit with other royal families from around the world. They are special people and committed to serve those who live in their country. With the way the world is, there is need for monarchies now more than ever, because the people are floating and insecure.

If you live in this world for a short time and manage to make a difference, this is a blessing. I’m very grateful to my husband who chose me and brought me into our great country where the people have been totally misunderstood. Every country has their handful of people who are not the way they’re supposed to be. Some countries have the whole world talking about them, and they just don’t talk back. The people of my country are tolerant; they are proud and they have no limits.