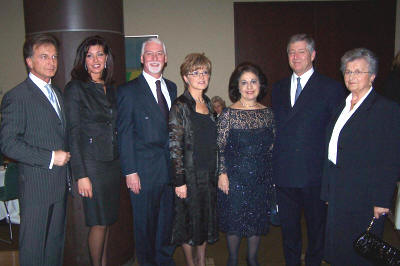 Under the patronage and in presence of Their Royal Highnesses Crown Prince Alexander II and Crown Princess Katherine a Lifeline small charity event with the theme: “A New Year’s Gift of Life” has been organised last night in the prestigious Granit Club in Toronto by Lifeline, Canada.

Beside Their Royal Highnesses, His Grace Bishop Christophoros of Andidon, Dean of the Greek Orthodox Theological Academy of Toronto, His Grace Bishop Georgije of Canada, General Consul of Serbia and Montenegro Mr. Zoran Pavlovic and members of the Lifeline Toronto and Lifeline Chicago gave to this charity event special light. Objective was to raise funds for the acquisition of vital medical equipment for the neonatal intensive care units of the hospitals of Serbia and Montenegro.

This humanitarian event shall be remembered for the effort of two relatives, 12-year old Michael Grujic from Toronto, Canada and 16-year old Tasha Grujic from Chicago USA. Michael decided to make his own fundraising and managed to collect 163 USD (11.630 CSD.) from his friends, just by talking to them. His cousin Tasha also made a fundraising by writing an e-mail to all Midwest Serbian Orthodox Churches. She managed to raise 8.600 USD (613.655 CSD)!

This amount will be used for the acquisition of medical equipment for the neonatal intensive care units of the hospitals in Belgrade, Novi Sad, Kragujevac and Nis.

It is a sad fact that, unfortunately, Serbia and Montenegro have the highest baby’s mortality rate in Europe. Therefore, it is a human and humanitarian must to raise funds for the medical equipment for neonatal intensive care units of the hospitals in the country.

Her Royal Highness Crown Princess Katherine established Lifeline, a registered Canadian humanitarian charity organization in 2004 in Toronto. Since then the charity has worked diligently and has provided much needed aid to the people of the war torn country. Lifeline is also established in London, Athens, New York, Chicago and Belgrade.