Once in line for the British throne, Prince Alexander is now a royal without a kingdom

From Royal Family, a Flipboard magazine by CBC News

He has been a crown prince his entire life, turning grey as he waits his turn to take the throne.

As a fixture of the extended British royal family, he’s been there for all the big milestones, including, of course, the royal weddings.

He, too, is a descendant of Queen Victoria, but unlike Prince Charles — his friend and distant cousin — Prince Alexander of Serbia calls Queen Elizabeth his godmother.

And unlike Charles, Alexander isn’t guaranteed to eventually rule his kingdom. Officially, that kingdom no longer exists.

The complicated life of Crown Prince Alexander — son of the last king of Yugoslavia — is removed and yet in some ways, parallel to that of Prince Charles.

The 72-year-old Alexander was once in line to the British throne, though quite low on the list — and he forfeited that birthright after his first marriage, to a Roman Catholic.

While the 69-year-old Charles is the next in line in a royal family watched and admired around the world — and has lived accordingly — Alexander worked and lived in exile for most of his years, paying his own bills, taking out a mortgage and serving in the British army.

He eventually returned to live in Belgrade in 2000, on a mission largely unknown outside Serbia to restore the monarchy and the titles his father never gave up.

Both Alexander and Charles are getting on in years and both are presiding as the next royal generation marks its own milestones with fanfare. Last year, Alexander celebrated the wedding of his son Philip, the first Serbian royal wedding held there since 1922. Then in February came the first male heir born in Serbia in 90 years. Prince Alexander announced the news in a Facebook post. 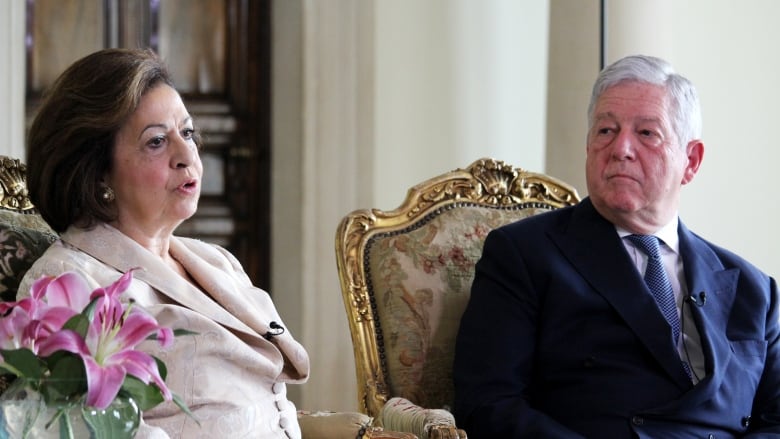 Alexander and Charles also have some key history in common. Both their stories began in London, and though in different ways, their lives were also shaped by the Queen.

“She’s a great example to the world,” said Prince Alexander in a wide-ranging interview at the royal palace in Belgrade. “The most advanced social countries in the world are constitutional monarchies.”

But in a year when the Windsors celebrate the marriage of Prince Harry and Meghan Markle, putting the family again in the spotlight, in Belgrade, Alexander’s family is still waiting for theirs, trapped in a royal limbo.

The disruption in the Yugoslav monarchy began when Alexander’s father, King Peter, left Yugoslavia in 1941 ahead of a German invasion. He settled in London to wait, where he married and later had a child.

On July 17, 1945, then-prime minister Winston Churchill declared Room 212 at Claridge’s hotel in London Yugoslav territory so that Alexander could eventually become the official heir to the throne.

The crown prince, whose full name is Alexander Karadjordjević, was christened later that year at Westminster Abbey, with Queen Elizabeth acting as his godmother. It was the start of a close relationship that involved frequent invitations to family occasions big and small, including Prince Charles’ and later, Prince William’s wedding.

Now back to live in his father’s royal palace in Belgrade, the crown prince told CBC his story.

“I wasn’t allowed to visit this place because I was [declared] an enemy of the state at the age of two,” he said, in a comfortable British accent. “It’s terrible to be an exile. My father suffered dramatically. He thought he was going to come home tomorrow. But it didn’t happen, because the communists took over.” 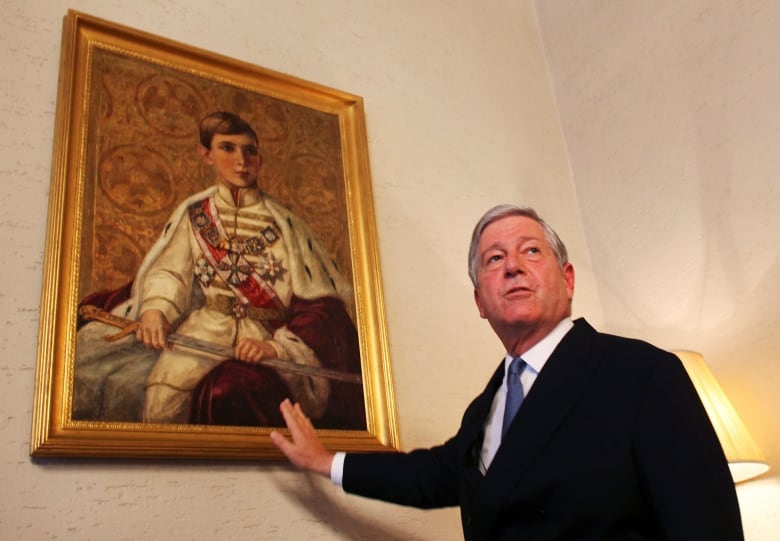 Prince Alexander gestures at a portrait of his father, King Peter, the last king of Yugoslavia, which hangs in the White Palace. (Marko Djurica/Reuters)

Communist Yugoslavia under Josip Broz Tito banished the monarchy, stripped the family of citizenship and banned them from returning home. Tito ruled from the White Palace until he died in 1980.

King Peter died and was buried in the U.S. in 1970. In 2013, Prince Alexander won the right to repatriate his father’s body to Serbia to be buried in the royal mausoleum.

‘You can learn from the past’

Now, at the royal compound, which is regularly opened to tourists, signs still remain of the tumultuous communist presence in the years between the Second World War and 1992 — they include an etching of a star on a granite column, the defacing of a religious image and a bullet hole in the fresco of Jesus on the domed ceiling of the chapel on the premises.

While restoring the palace, Prince Alexander decided against removing that evidence, saying only dictators try to alter history. “I don’t think you can ever erase the past. You can learn from the past and move ahead and create good moments.” 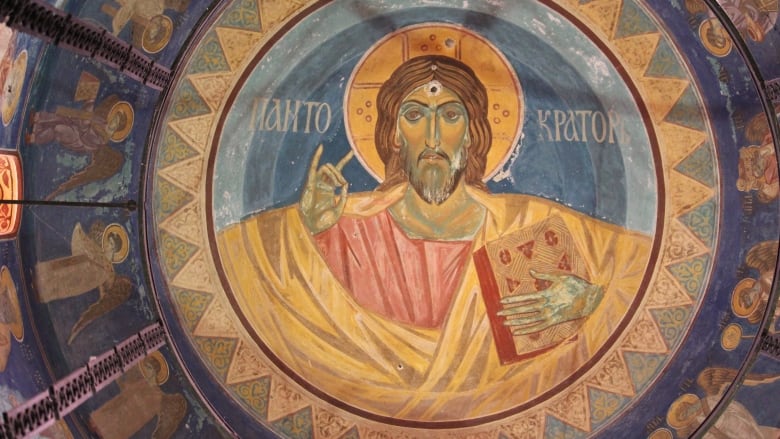 One of the lingering signs of the communist presence in the Royal Palace in Belgrade is a bullet hole in this fresco of Jesus. (CBC)

The kingdom itself is in the past, and has since broken up into several states. After the revolution that unseated former Serbian president Slobodan Milosevic in 2000, the Serbian government allowed the royal family to return to live in and use the palaces.

But Serbia has not reinstated the monarchy, and thus Alexander and his family have not yet reclaimed their place at the helm of Serbian society.

Alexander said Serbia — a halting democracy drifting again toward nationalism and increasingly under Russian influence — could benefit from the “continuity, stability and unity provided” by a monarch. He said it should have been done years ago.

But “the people have to decide.” 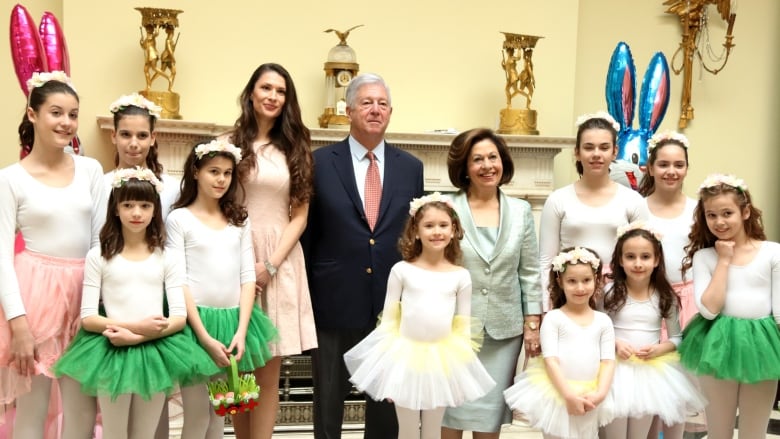 Katherine called her husband “the king of peace,” pointing to his role in bringing leaders from all the country’s faiths together for the first time in 2001.

“He brought democracy… a country needs a unifying factor, which is what he became after this incredible conflict,” she said.

“It’s like having the same parents all your life — it is just the way it is.”

Life in the White Palace

Life for Serbia’s royals now revolves around their compound, which contains two palaces built by Alexander’s predecessors. The palaces have become central again in capturing the public’s imagination and telling the royal story.

The couple lives in one of the palaces and use the other, the White Palace, for meetings and official functions, including the visit from Prince Charles in 2016. 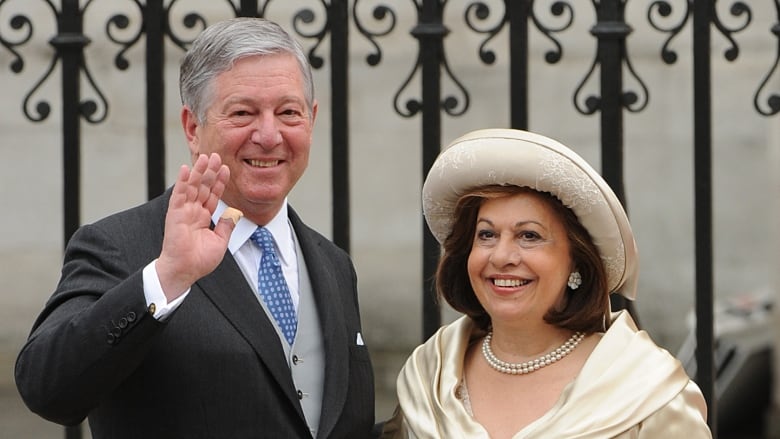 The palace also hosted the reception after the lavish wedding of Prince Philip and his wife, Danica, last year. The couple borrowed heavily from past royal weddings, including wearing velvet crowns. Their wedding was broadcast live in Serbia, sparking renewed interest in the family.

It also attracted its fair share of media attention, including in Britain, where the couple met. They shared the details with Vogue magazine.

It may have been a smaller affair, but the effect for the family is no different than that of Prince Harry’s wedding: it was a boost for the royal family and to its popularity.

“It’s wonderful and we feel that this will be one more joy for the UK and all those who believe in the British monarchy,” said Princess Katherine. It’s one more instance of “good news,” she said, “and this is what keeps things going.”

Presumably they will be attending Harry’s wedding on Saturday, but out of respect for the soon-to-be-married couple, they would not say whether they were invited.

The birth of a new member for both families this year is also seen as a shot in the arm.

“He’s a beautiful little boy and we’re very happy that he was born here,” said Prince Alexander of his first grandson, Stefan.

Without official duties, the Serbian royal couple focuses on charity, including raising money to purchase equipment for health facilities. The princess’s charity has a Toronto branch that recently raised enough money to purchase a new delivery table for a local Belgrade hospital. 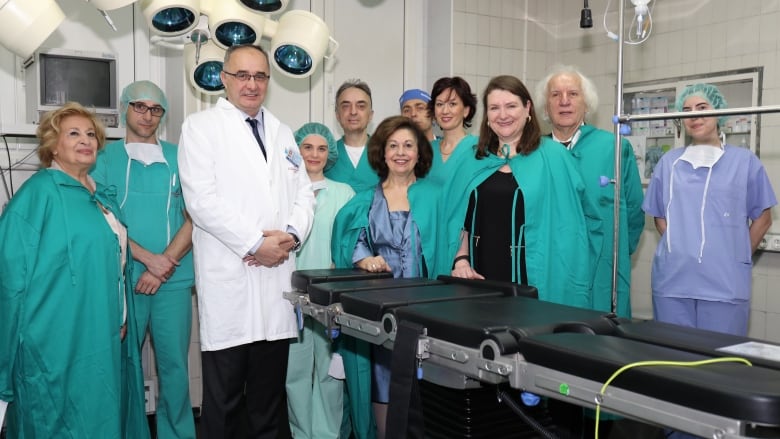 The Serbian royal couple focuses on charity, including raising money to purchase equipment for health facilities, such as this new delivery table for a Belgrade hospital. (Royal family of Serbia)

The couple meet with hundreds of orphans twice a year — at Christmas and at Easter. The children are treated to a show and handed gifts by the princes themselves, to briefly behold the magic of royalty.

For Crown Prince Alexander, his family’s palaces could hardly be put to better use.

“It means a lot that the palace is being used for something good, that it becomes a tradition.”

When engaging with the public at events like this, Alexander and Katherine are truly treated like royalty. It’s not unusual at such events to hear someone say, “Long live the king.”

All the pieces are in place for their official return, said Prince Alexander — even a flag with a royal coat of arms on it. “All we’re missing is the monarchy.”