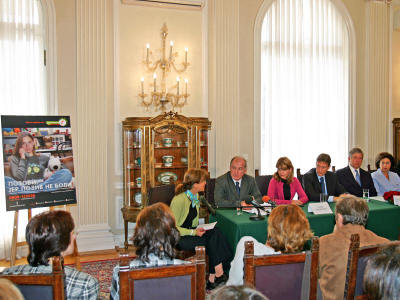 Their Royal Highnesses, Crown Prince Alexander II and Crown Princess Katherine hosted today at The White Palace a news conference on the occasion of the opening of the Child SOS Line, a part of the state project in support of children’s and youths’ rights.

The project was initiated and implemented by HRH Crown Princess Katherine’s Foundation in cooperation with the People’s Office of the Serbian President Boris Tadic  and Serbian ministries of Health, Labour Employment and Social care  and Education  and with a support of The Centre for newborns, children and youths.

The Lifeline humanitarian organisation from Canada under the patronage of Princess Katherine helped the Foundation securing money for the project.

HRH Crown Prince Alexander thanked everybody involved in the project and said he was very happy because his wife’s foundation was a meeting point for those participating.

‘’My pride and satisfaction are even greater because with this project our country is getting closer to Europe and the world in the field of protecting the rights of the children. Children are our future and their future is in Europe where to we, with our work, have to lead them,’’ the Crown Prince Alexander II told reporters adding that everybody in this country has to work on protection of the rights of all people regardless of their ethnicity or religion.

Serbian Education Minister Slobodan Vuksanovic said that his Ministry helped the project in a hope that ‘’if in an action like this we save one child who’s in trouble that’s the reason to celebrate and be proud.’’

Mrs. Slavka Lakicevic, Deputy Labour Minister, said he was happy because of the opening of the telephone line which, in addition to recent legal changes that for the first time in Serbia regulated the protection of children’s rights, will help those in need.

Mr. Djordje Stojiljkovic, from the Serbian Health Ministry, said he hoped that ‘’the SOS line would help decreasing the number of problems our children and youths are facing.’’

Mrs. Tanja Pasic from President Tadic People’s Office said it was not possible to help all of those in need but that, nevertheless, she hoped that the Office, in cooperation with others, ‘’will help moving things on and doing something real.’’

The Director of the Centre, Mr. Zoran Milacic said that this was a pilot project and that in its first phase it would have a consultative and informative role. ‘’At the same time, the project will improve based on our own experience and the category of problems we will be facing.’’

Mrs. Nevena Vuckovic – Sahovic, from the U.N. Committee for Children’s Rights, said that the SOS line was ‘’a big step forward from the U.N. point of view.’’

Mrs. Milica Vukasinovic- Vesic, the project’s coordinator from Princess Katherine’s Foundation said that telephone calls would be handled by experts who were additionally trained by their colleagues from the UK and Netherlands where such lines exist for over two decades.

The project’s target groups are children with domestic problems, problems in school, over-concerned children, those with suicidal attempts and alike. The idea is to involve wider community and other institutions like police and social services in order to secure full protection of children’s rights.