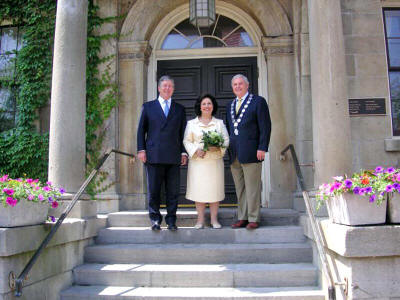 Their Royal Highnesses Crown Prince Alexander and Crown Princess Katherine were guests at a reception in the historic Niagara-on-the-Lake (Canada) city hall hosted the Lord Mayor Gary Borroughs. The guest list included members of the city council, Chamber of Commerce and local business and civic leaders. The Lord Mayor welcomed the royal couple warmly and in honor of the royal visit the city of Niagara-on-the-Lake flew the flag of Serbia along with the national flag of Canada on the official city semaphore. Niagara-on-the-Lake is major tourist destination in North America as the town is the site of the earliest capitol and sits along the shore of the Niagara River and Lake Ontario.

While in Niagara-on-the-Lake the royal couple stayed at The Old Bank House Inn owned by family friends Misha and Judy Djurdjevich who helped arrange the royal visit.

The city hall visit in Niagara-on-the-Lake was followed by a visit to the Hotel Michael’s Inn located in view of Niagara river water fall. The historic hotel is owned by the John and Milicent Gruyich family who greeted HRH Crown Prince Alexander with a birthday cake decorated with the royal cipher in gold. The reception was followed by a luncheon in the magnificent Skylon Tower, a five hundred and thirty foot (55 building stories) tower containing retail shops and a rotating restaurant at the top. The luncheon was hosted by the George and Violet Yerich family, owners of the Skylon Tower. The interrelated Gruyich and Yerich families have been major supporters of the Serbian Orthodox Church and charitable institutions in Canada for a number of generations.