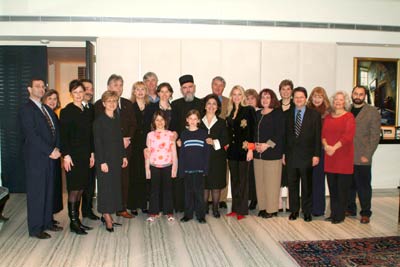 The series of concerts “The Princess and the Prodigy” were attended by the most prominent public figures. Beside the proceeds from the sold tickets, that will be in aid of our country, the concerts of Marina Arsenijevic also have the aim to inform the international community about our country’s needs as well as about the Serbian cultural heritage.

The success of these events is confirmed by the fact that a new series of concerts under same patronage and in the same organization will be held by the end of the year.

The organizers of these concerts is “Lifeline” humanitarian organization under patronage of HRH Crown Princess Katherine with its offices in Chicago, New York, Toronto, London, and Athens. The seat of “Lifeline” is in Belgrade, under the name of the Foundation of HRH Crown Princess Katherine. This Foundation provides material and medical help to the children, health institutions and socially endangered categories of population, as well as assistance to the pupils and students who showed outstanding results in their education. The activities are in coordination with the Government of Serbia as well as with the local, regional and international NGOs.

Marina Arsenijevic, born in the former Yugoslavia, is one of the most famous European music performers. As a prodigy, when she was 9, she performed for the audience of 2,000. She received 6 international piano competition awards. The leaping success of her career is shown by the sold out performance at the Carnegie Hall in 2003, as well as the guest performance at the First Ladies’ Lunch organized by the wife of the American President Bush.