The Vidovdan Celebration in Canada 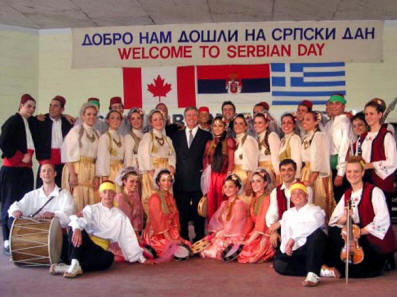 This annual Serbian Days event, sponsored by the Serbian National Shield of Canada was held on the property of the St George Serbian Orthodox Church. After attending a memorial liturgy the Royal couple was warmly received on the picnic grounds next to the church by over 6,000 Serbs from Canada and the United States.

As the key speaker on the occasion of this anniversary, HRH Crown Prince Alexander reflected on the significance of Vidovdan and Kosovo:

“Kosovo has symbolized for almost seven centuries our Holy Land, the cradle of Serbdom, and part of its inalienable, historical, national and cultural heritage“.

In addition he spoke about the contemporary challenges of today’s Serbia and called upon the Serbian people in the Diaspora and homeland to unite in order to create a better future:

“Today in the 21st century, Serbia is facing many challenges, but the Serbian people have the strength to overcome them. I call upon you to work together and to keep on building our modern Serbian democratic state and society based on justice, genuine democracy, mutual respect, human rights and tolerance”.

Also addressing the audience at this major annual event were high-ranking members of the Canadian government, the Ontario provincial parliament, the acting Mayor of Niagara Falls, Consul of the Republic of Serbia and Montenegro in Toronto and numerous representatives of Serbian cultural and religious organizations in Canada.

The keynote speech was followed by a full program featuring Serbian folk dance and musical performance groups from around Canada.